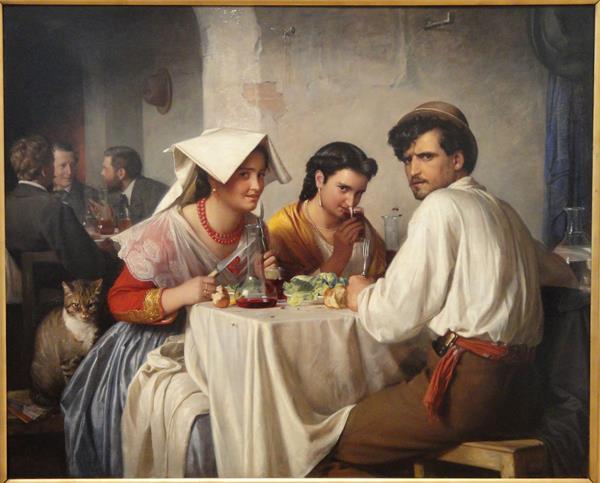 In a Roman Osteria – Carl Heinrich Bloch. Click for large image, worth it!

I hate shopping malls. To my mind, they represent everything that is wrong with our world. They are the high temples of limitless consumption and buying useless crap.

And yet, I’ve had lunch in one of them today… so much about principles…

My meal was certainly not made in spirit of limitless consumption, it looked more like a kid’s portion, but I’m cool with that. Always good to know they care about my figure.

The restaurant was on the 2nd floor and I sat by a large glass wall facing the street. It was a great spot to witness what was going down in the street.

There was this guy handing out leaflets. I always feel sorry for folks working such jobs. Most of his targets ignore him completely, some say no thanks, and the few who take the leaflet only do so out of sympathy for the poor fellow. It must be really tough to keep yourself motivated like that. I bet that doing this for too long can’t be good for one’s self esteem. Or who knows, maybe the way to overcome fear of rejection is to be rejected hundreds of times a day!? That would make an interesting study. But I digress…

So this guy is handing out leaflets. Most of us would expect the distribution of people who take the leaflet and those who don’t roughly even over time. But it’s not.

The pattern that emerged quite clearly is this: there’d be no takers for a while and then suddenly 10 or 20 in a row. Then again no takers for a while and yet again a bunch of takers. Series of takers and non takers would alternate at a random frequency while the traffic in total was pretty much constant. The likeliness of someone taking the leaflet was much higher if the previous person was a taker and much lower if it was a non taker.

It was fascinating to watch this seemingly irrational, but very human behaviour unfold before my eyes.

It all reminded me of the nature of applause. Very few people stay out of clapping when everyone else around them claps and almost nobody ever continues clapping when people around them stop. We know that one person is enough to get the whole audience clapping, but what may be more surprising is that a very small number of people is also enough to stop the applause.

What these two examples have in common is that our behaviour is very easily influenced by our peers and that while we often think we are making a rational decision, we might in fact be doing what we are doing just to conform with the group.

There are libraries of research on the subject of conformity, herd behaviour, peer pressure and all the rest. But the point to remember is this:

When you open up your restaurant and want me to go for lunch, sure, I will look at your menu and a warm smile from your waitress girl will also help. But if you’ve got no one else in there, I’ll probably go next door.

P.s.: Bonus point if you like running customer surveys: it’s essential to get feedback from your customers, but there are things that a customer satisfaction survey will never reveal. You can’t ask the people that didn’t go in to your restaurant why they didn’t, can you? Even if you could, they would make something up, but would never say that “because there was no one else in there”. SOMETIMES observing silently reveals more than asking directly. Nothing can replace cooking great food though.