The beauty of travelling without a plan is you have no idea where you might end up going next. But eventually you have to make up your mind and pick a destination.

After 3 months in Ecuador, I picked Medellin.

It made sense geographically and I only heard good things about it. Some accounts were so enthusiastic that I should have been wary of their truthfulness.

Instead, I believed it all and was expecting a city where the most beautiful women on earth walked around topless and couldn’t wait for me to arrive. A city that never slept and was the focal point of South American night life. A city with crisp air, plenty of green space and super-efficient public transportation.

I admit to slightly exaggerating there (I didn’t really expect super-efficient public transport), but it’s a fairly accurate description of the image you’ll have formed of Medellin if you read the accounts I did.

So how did reality measure up?

First things first. It’s true – Medellin has some of the most beautiful women on earth. Just like Berlin, London, Budapest or any large city does. But after a month of living there, I doubt that Medellin has a higher ratio of beautiful women than any other city of its size. I see a few reasons why this might have become a widespread idea though.

So while I’ll admit that male drivers are more likely to cause an accident in Medellin because of a sudden lapse of attention than in say Quito, I’ll also add that the most beautiful and easiest women on earth thing is a myth.

This is not a myth, the people of Medellin, both men and women, are surprisingly friendly and helpful. I often asked for directions and when they saw I didn’t understand their instructions, many of them actually walked me to my destination.

I lived in Envigado, which is one of the safest areas of the city. It feels like a small town, because it is. Or was, until it was swallowed by Medellin in the seventies. There are some other parts of the city that are perfectly safe, but the central area was a huge disappointment for me. After dark, the most prestigious squares are overtaken by herds of drunks and the kind of people who make you feel unsafe. Apparently, the northern part of the city is also best avoided after dark.

The metro system is great and gets you from A to B quickly and cheaply. Buses are not designed for European heights though. They are small in every dimension and are always crowded. I never got a seat once, which I don’t usually mind, but having to stand with my backbone cracking the roof open is not my idea of efficient travel. To make it worse, there are no bus lanes. Buses get jammed in traffic along with the myriads of cars in rush our so that walking is often quicker.

On the flip side, taxis are plentiful and cheap. They always use the meter so you don’t need to worry about getting ripped off.

Medellin seems to be a bit of a motorcyclists heaven. Definitely not because car drivers watch out for them though. I rather think the weather has more to do with it.

A beautiful little lake around 45 minutes outside Medellin.

Parks and green areas in Medellin are illusive in my experience. You are surrounded by huge green mountains that make you think you’re in one big green space, but you’re actually in a crowded concrete jungle.

A place to run within reasonable distance without having to breathe exhaust fumes is kind of a deal breaker for me. In Medellin I didn’t have that, at least not in Envigado. The Botanic Garden, which is a fantastic place, was an hour away by public transport and wasn’t ideal for running. My best daily option was running on the pavement alongside traffic jammed Avenida Poblado.

I had the impression that as the city’s expansion was halted by the surrounding mountains, parks and open spaces were sacrificed on the altar of development.

Parque Lleras is where the action happens on Fridays and Saturdays. Plenty of bars and clubs to dance, filled with masses of locals and tourists. When the party is over in the park, some places open up in another part of the city for those who can’t stop.

Forget queuing at the bar for shots, everyone drinks Aguardiente by the bottle. It’s quite a pleasant drink with its 20% alcohol content and mild anise taste.

Medellin has a lively party scene at weekends, but don’t expect much on weekdays though.

“An artist is attracted to certain kinds of form without knowing why. You adopt a position intuitively; only later do you attempt to rationalize or even justify it.”  Says Fernando Botero, the most recognized living artist of Latin America, whose first illustrations were published in a Medellin newspaper.

His fat figures have become iconic both in painting and sculpture. Be sure to check out the square and museum named after him in Medellin. The city boasts a number of other museums and theatres so your cultural needs will be taken care of. Understanding Spanish is a big plus of course.

If you like shopping, you’ll love Medellin. It has loads of shopping centers. Too many if you ask me. I kept finding myself in one of them whenever I went out for drinks or dinner with locals. 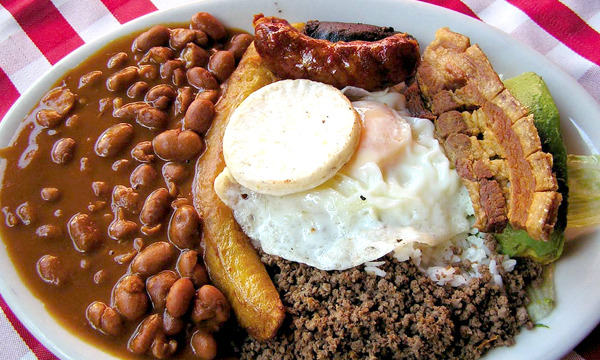 Traditional Colombian food is nice (especially if you like meat) and cheap. You can get pretty much anything if you pay top dollar, but the street food scene is dominated by greasy empanadas and junk food. You really have to look hard to find a somewhat healthy option.

In Envigado I found a couple of places offering daily menus of pollo con arroz (chicken with rice) also including a bit of veggies and a drink for a few bucks. There are a few vegetarian restaurants as well. I’ve been to one of them and had an ok lasagne.

Medellin is the city of eternal spring they say. It’s essentially true. The weather is nice and mild year around. It often felt a ted hot for wearing trousers though and shorts make you look like an idiot, or worse a tourist, in Medellin. But that’s just me bitching around. You don’t get much better weather year around than you do in Medellin.

Pretty good. Food is reasonably priced and so is accommodation as long as you pay local prices. Gringo rates are often double that of what locals are willing to pay for short or medium term rent. Partying can be somewhat costly, but you won’t be doing that every day.

You might have guessed, my verdict is that Medellin is overrated. I fell in love with the image of the city, but did not with the city itself.

That said, there is a lot going for Medellin and I highly recommend that you pay a visit. I hope I’ve succeeded in lowering your expectations and you might as well find yourself pleasantly surprised.

Did you have a different experience in Medellin? I’d love to hear your opinion in the comments!